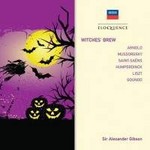 Issued in the US under the title 'Witches' Brew', Alexander Gibson and the New Symphony Orchestra of London recorded this album in 1959 and the performances remain today as characterful and incisive as they were then.

While pieces from this recording have previously appeared on Decca, this is its first complete release on the label. Given that the music is a kind of Halloween concoction, it is now filled out on this reissue for CD with two supernatural pieces by Gounod - his Funeral March of a Marionette and the sparkling Ballet Music for Faust, both recorded in 1964 and which have come up sizzlingly well on CD.

Mussorgsky:
Pictures at an Exhibition: The Gnome
A Night on the Bare Mountain