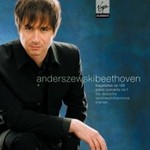 "Every Bagatelle twists the kaleidoscope; every time Anderszewski finds an invigorating and apt tone and attack to make these jagged morsels far grander than their modest length suggests."
(The Times on line)

"Piotr Anderszewski's superfine control of colour, rhythm and nuance are as breathtaking as ever."
The Top 10 Classical Recordings of 2008 (Telegraph UK)

Piotr Anderszewski made his debut on Virgin Classics in 2001 with Beethoven's marathon Diabelli Variations; he now returns to Beethoven with a performance of the Opus 126 Bagatelles, contemporary wth the Diabelli Variations and Beethoven's last compositions for the piano. Arranged as a cycle on a clearly-defined tonal plan, the Bagatelles are, in Beethoven's words, 'certainly the best things of this kind that I have written'. Piotr Anderszewski follows them with the Piano Concerto No.1 - in fact Beethoven's second, but the first to be published, in which he directs the Deutsche Kammerphilharmonie Bremen from the keyboard. Of his performance of the Concerto No.1 at London's Barbican Centre in 2003 the Daily Telegraph wrote, 'Here is an artist who truly recreates the music every time he plays; there's no sense of routine, nor of large-scale distortion, simply a liking for pointing up detail, shifting emphases and subtly pushing boundaries.'