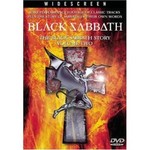 Volume 2 of the Black Sabbath Story covers the period subsequent to frontman Ozzy Osbourne's departure, and his radical replacement by new vocalist Ronnie James Dio. After enjoying a renaissance with Dio, Sabbath then saw many changes to their line-up, with new personnel including such luminaries as Ian Gillan, Glenn Hughes, Tony Martin and Cozy Powell.

Performance footage and candid interviews (many previously unseen) give us the definitive picture of this somewhat tempestuous period in Sabbath's history.