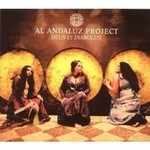 "The bewitching Deus et Diabolus (God and the Devil) threads together the voices of three women: Mara Aranda, from Valencia's L'Ham de Foc; Sigrid Hausen, from Munich's medieval music group Estampie; and Iman al Kandoussi. They are accompanied by a lively ensemble of flutes, qanun, ud, saz, rabab, fiddle, nyckelharpa, hurdy-gurdy, pandera tambourines and percussion. It's an inspiring encounter between the talented musicians of L'Ham de Foc and Estampie recorded in the old Cartuja Monastery, Cazalla de la Sierra, Seville. This is sprightly music, fusing Mediterranean, Oriental and medieval moods. The ethos underpinning their reinterpretations of Arab, Jewish and Christian cantigas to the Virgin Mary, their reimaginings of sensual dances and Arabic songs, is expressed by a line from poet Ibn al-Arabi, `Wherever the caravan may bend its steps/Love is my religion'.

While each exquisite piece speaks for itself, they flow together like a song cycle embedded in a utopian view of the past as one of dialogue and peaceful co-existence between religious cultures. The 13th-century `Cantiga de Santa María' is just one breathtaking moment, transporting in the way the timbres and textures of voices and instruments interweave. The arrangements for each of the 12 songs are stunningly varied, each `voice' jewel like, distinctly within the fabric of pieces.

Frustratingly, the attractive booklet (in German, Spanish and English) offering general background and interspersing songs texts in Arabic and old Spanish, with seductive photos of the three women and Seville's Arabic Baths, fails to include the vivid `story' detail that would help reference the individual songs that capture attention. Still, it's a brilliant disc nonetheless."
Jan Fairley (Songlines magazine, June 2008)