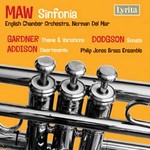 Born on 5 November 1935 in Grantham, Nicholas Maw studied at the Royal Academy of Music from 1955 to 1958 with Lennox Berkeley and Paul Steinitz, and in Paris with Nadia Boulanger and Max Deutsch. Despite the merits of such early works as Nocturne for mezzo-soprano and chamber orchestra (1958) or his Webernesque Six Chinese songs (1959), it was not until the première of his cantata for three women's voices and orchestra, Scenes and Arias at the Proms in 1962 that Maw first came to prominence