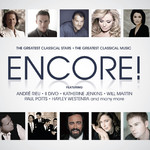 This 2CD set includes classical legends such as Pavarotti, Bryn Terfel and Anna Netrebko alongside contemporary favourites André Rieu, Russell Watson, and Katherine Jenkins. Also included are new crossover stars Paul Potts, Il Divo, Blake - who won the "Album of the Year" Award at 2008 Classical Brits - and our very own Will Martin and Hayley Westenra.

'Encore!' offers a musical programme of maestros and new stars that you will want to hear again and again!

The Voice: The Ultimate Collection