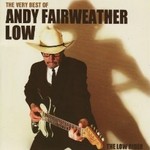 From the early days in Amen Corner, his solo career and then years spent with Eric Clapton, Roger Waters, Bill Wyman, Bob Dylan, Jimi Hendrix, The Who, George Harrison and BB King, Andy has not just been a stalwart but a shining light...

Andy Fairweather Low has been something of a quiet man of rock. Chances are you'll know his hits - "Wide Eyed and Legless", "Reggae Tune", "Bend Me Shape Me", "Hello Susie", "(If Paradise is) Half as Nice", "Gin House Blues", "Natural Sinner"…. if not his name, but all that's about to change.

From the early days in Amen Corner, his solo career and then years spent with Eric Clapton, Roger Waters and Bill Wyman, not to mention playing with Bob Dylan, Jimi Hendrix, The Who, George Harrison and BB King, Andy has not just been a stalwart but a shining light. 'The Very Best of Andy Fairweather Low: The Low Rider' quite rightly celebrates that fact. The CD effortlessly mixes re-recorded versions of his biggest hits with some of the most in-demand live numbers that he plays on tour.

Born in Cardiff, Andy originally came to fame as vocalist and leader of pop group Amen Corner that claimed an international No 1 with (If Paradise Is) Half As Nice. He then formed the band Fairweather and subsequently began his illustrious solo career. Hand in glove with his music came his tennis - Andy is also an International tennis pro. Some of the musical highlights over the years have included:

Backing vocals on the Who's 1978 'Who Are You' and subsequent playing on their '82 'It's Hard' album and with Pete Townshend on his 'Psychoderelict' tour.

Touring since the early 90s as a mainstay of Eric Clapton's band and playing on eight albums with Eric.

Performing with George Harrison and at the 'Tribute For George' concert

Working with Roger Waters since 1985, a long and rewarding relationship which recently saw Andy rejoining him for the 'Dark Side Of the Moon' tour.

Playing in Bill Wyman's Rhythm Kings, a relationship that dates back to 1983 when they worked together on Ronnie Lane's ARMS benefit concert at the Royal Albert Hall.

In the Flesh: Live (Limited Edition)