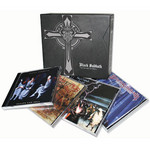 Black Sabbath
The Rules of Hell

Get schooled in the most important rules with 'The Rules of Hell', Rhino's five-disc set presenting Black Sabbath's entire Dio-fronted catalog in one sleek black slipcase box! The collection pulls together all three of the group's studio releases: 'Heaven and Hell', 'Mob Rules' and 'Dehumanizer', plus their double-live album, 'Live Evil'. The beyond-heavy box also features extensive liner notes including new interviews with the band members.

Each album has been re-mastered for the first time since it was originally released, serving up full throttle sonics on these seminal metal titles:

'Heaven and Hell', first out in '80, is now regarded as one of Sabbath's all-time best, introducing epic cuts including "Neon Knights," "Die Young" and the title track, which is featured in the game 'Grand Theft Auto IV'.

'Mob Rules' ('81) features classics including the title track, "Falling off the Edge of the World," "Turn up the Night" and "The Sign of the Southern Cross".

'Dehumanizer' ('92), regarded by many metal fans as a "lost classic," came out after a decade long hiatus and rocks with tracks including "I," "Computer God" and TV Crimes."

The incarnation of Black Sabbath featuring Ronnie James Dio was born in 1980 when founding members Tony Iommi (guitar) and Terry "Geezer" Butler (bass) added the former Elf and Rainbow lead vocalist to the group. The line-up's short but influential first stint together added an unforgettable chapter in Sabbath's storied history. Then, in 2006, they delighted fans worldwide by rewriting the rules again - Dio, Iommi, Butler and Appice reformed under the new band name Heaven and Hell to record new tracks for Rhino's compilation 'Black Sabbath: The Dio Years'. The chemistry generated by their reunion led to an acclaimed world tour and live album and DVD in 2007. 'Heaven and Hell' will continue to tour, and are currently recording their first studio album together since 1992.

Stand Up and Shout - The Dio Anthology