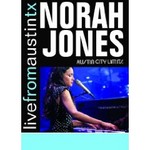 What a ride it's been for Norah Jones since that night in March 2002, when she revealed her rich, seductive tones performing in a cramped room above an Indian restaurant in downtown Austin, at a South by Southwest showcase. A few months later she recorded her first Austin City Limits session. Now, after five years; many millions of CDs sold; a shelf full of Grammy awards; and worldwide acclaim, Norah returns to ACL as one of the most successful & respected recording artists of the decade.

This performance from June 14, 2007, includes some of those now classics that captivated an audience longing for heartfelt music. It also highlights her growth as a serious songwriter on her third record, 'Not Too Late'.