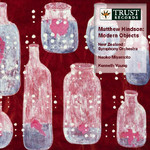 Trust Records presents the first fulllength disc devoted to the music by composer Matthew Hindson. The orchestral works of this Australian composer usually provoke wildly
differing reactions - some people believe his cross-pollination of classical forms and instrumentation
with elements drawn from extreme styles of contemporary popular music (techno and death metal included) is nothing short of artistic desecration, while others (a majority, it might be noted) greet his music with rapturous enthusiasm.

Certainly, it would be hard to accuse him of writing in an
inaccessible style!

Featured on this CD are debut recordings of Hindson's A Symphony of Modern Objects (Symphony No 1) and Headbanger.

His large-scale Symphony No 1 explores aspects of contemporary culture through four movements: 'Silicon Revolution' portrays the advent of the computer,
'Spirit Song' responds to the New Age Movement, 'Twisted Ladders' looks at biotechnology, painting an optimistic or naïve vision of the present and future and 'Vietnam War Memorial' reflects upon the traumatic period of recent history. Rising star Naoko Miyamoto, who first performe the Violin Concerto No 1 in 2001, presents a stunning and soulful performance of this work with the New Zealand Symphony Orchestra conducted by Kenneth Young, one of NZ's leading conductors.

A Walk With Ivor Gurney