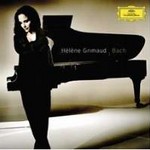 "A musically hot and trendy French pianist shows why she is one of Deutsche Grammophon's superstars with an unconventional, provocative Bach recital that, in the words of Rodney Dangerfield, don't take no shit from nobody."
[AudAud.com ****(*)]

"A musically hot and trendy French pianist shows why she is one of Deutsche Grammophon's superstars with an unconventional, provocative Bach recital that, in the words of Rodney Dangerfield, don't take no shit from nobody.

Mixing nominally Urtext Bach with virtuoso arrangements by Rachmaninov, Liszt and Busoni and, in the middle of it all, a driven, dark and moody performance of the composer's great D minor Piano Concerto, Hélène Grimaud paints a portrait of Bach that seems designed to encourage the yellow label to appeal to a wider, younger audience as well as experienced, shock-resistant fanciers of the cantor.

"On this new Grimaud adventure, everything is close-up and mostly very smooth with integrated touches of sonic claustrophobia and mysteriously distant reverberation, and it serves Grimaud's interpretations which are parsimonious in their use of white space, leading occasionally to stupefying effects of breathless continuity."
[AudAud.com ****(*)]

"This is a major release. The piano sound is expertly realised. Grimaud is still young (she was born in 1969) - on the present evidence, one has to ask, just what can she go on to achieve?. Future releases are eagerly awaited."
(Recording of the Month May 2009 MusicWeb)

"…the C sharp minor Book 1 Prelude and Fugue radiates nuance, linear dimension and a captivating organic flow that evokes Edwin Fischer and Samuel Feinberg at their most sublime. While Grimaud imbues Busoni's violin transcription with freewheeling momentum and organ-like sustaining power and resonance, she scales down Liszt's organ transcription to more intimate, less gothic tonal dimensions, and quite convincingly so at that."
(Gramophone)

Once again, charismatic Hélène Grimaud presents an album with an individual concept. Bach vs. Bach Transcribed brings together original keyboard works by the master with works by Bach arranged (transcribed) for the piano by pianist-composers of later generations: Busoni, Liszt, Rachmaninov. This is the first time that Hélène Grimaud has recorded Bach - a challenge for any musician. The repertoire includes the famous Well-Tempered Clavier II and the Concerto no. 1 in D minor, the latter performed with Grimaud's regular collaborators, the Kammerphilharmonie Bremen. Bach "Transcribed" features the Bach/Busoni version of the Chaconne in D minor, the Violin Partita in E major arranged for piano by Rachmaninov, and Liszt's version of the Prelude and Fugue in A minor