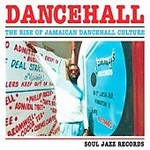 'Dancehall - The Rise of Jamaican Dancehall Culture' released on Soul Jazz Records is an essential guide and who's who to the phenomenal explosion of Dancehall in Jamaica in the 1980s and its subsequently rise throughout the world.

The album comes with extensive text by Steve Barrow, co-author of the acclaimed 'Rough Guide to Reggae' and features Dancehall classics throughout - capturing the vibrant, globally influential and yet rarely documented culture that has been mixing music, fashion & lifestyle with attitude since its inception.

Dancehall is at the centre of Jamaican musical & cultural life. From its roots in Kingston in the 1950s to its heyday in the 1980s, Dancehall has gone on to conquer the globe, spreading to the U.S.A.; U.K.; Canada; Japan; Europe, and beyond. Dancehall is also a culture that encompasses music; fashion; drugs; guns; art; community; technology, and more.