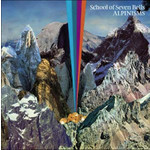 On 'Alpinism', the group's debut full-length, they deliver a heavenly blend of vocal harmonies & post-krautrock chug.

"Their new project reveals a range of influences and a sophisticated approach to arrangement that sets the trio well apart from less imaginative latter-day shoegazers."
-SPIN

"The Brooklyn-based act's debut album conjures an impossible collaboration between the Cocteau Twins, Sherpa Tenzing and the US laptop maestros Matmos..."
-MOJO

"Twin sisters Alejandra and Claudia Deheza make music that seems lifted from a dream... One of the year's most intoxicating debuts."
-CLASH