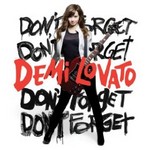 'Camp Rock' star, Demi Lovato teamed up with the Jonas Brothers to co-write several of the tracks on her debut album. It was a natural collaboration, since Demi counts Nick, Joe and Kevin among her best friends. Their inerrant feel for hook-laden rock helped Demi deliver on her vision. "If I were to write the album by myself it would probably have been a little more serious," she notes. "But I didn't want that. I wanted a fun album."

It's hard to imagine anything more musically fun than full-out rockers like "Get Back" and "Gonna Get Caught," both written by Demi with Jonas Brothers. Says Demi, "So many guys cheat and play games. I thought there needed to be a song about a guy getting caught. Nick said, `Can't it have a happy ending?' But I said, `No, no, no!'"

She balances the uptempo tracks with sweeping ballads like "Two Worlds" and "Believe in Me," the latter featuring a message Demi takes seriously. "Being a teenage girl you deal with insecurity," she says. "People think if you're in the spotlight, you're overly confident, but most of us deal with so much criticism, it gets to us. I'm the type of person who wants to take it with a grain of salt."

Demi's vulnerable side comes through on "Until Your Mine" and the title track, a touching ballad (co-written with Jonas Brothers) about a faltering relationship. She explores similar territory in "On the Line," an uptempo duet she co-wrote and sings with Nick Jonas. "We wanted to write a breakup song," Demi says, "and what better way to say it when you're breaking up over the phone than with the title `On the Line.'"

Demi's inner rocker girl comes roaring back on "Party" and "LA LA Land," a droll take on SoCal life and all its attending artifice. Showing her songwriting skills Demi wrote "Trainwreck" all by herself. She wraps the album with "The Middle," a strikingly mature song about finding balance in love and life.