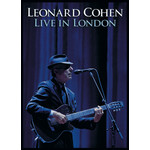 For over four decades, Leonard Cohen has been one of the most important and influential songwriters of our time, a figure whose body of work achieves greater depths of mystery and meaning as time goes on. His songs have set a virtually unmatched standard in their seriousness and range. Sex, spirituality, religion, power - he has relentlessly examined the largest issues in human lives, always with a full appreciation of how elusive answers can be to the vexing questions he raises. But those questions, and the journey he has traveled in seeking to address them, are the ever-shifting substance of his work, as well as the reasons why his songs never lose their overwhelming emotional force. Documentaries, awards, tribute albums and the ongoing march of artists eager to record his songs all acknowledge the peerless contribution Cohen has made to what one of his titles aptly calls "The Tower of Song".

In 2008 Leonard Cohen embarked on his first tour in 15 years. Quickly recognised as musical folklore in the making, 29 of the original dates sold out almost immediately, leaving fans and critics alike hailing the show as a once in a lifetime experience. By popular demand, the tour was extended and by the end of that year it had reached 84 markets worldwide, selling more than 700,000 tickets. Dates in New Zealand & Australia followed in early 2009.

This DVD was recorded live on July 17, 2008 at London's 02 Arena, one of Europe's largest indoor venues, fully capturing and recreating the extraordinary show that earned Cohen more than 80 five-star reviews for performances during his fall 2008 tour. 'Live in London' offers definitive performances of classic songs drawn from the artist's 40-year repertory.

"Cohen poured everything he had into a stunning performance."
-ROLLING STONE (June 9, 2008)

"Cohen's master class will become Irish concert lore... Quite simply, it doesn't get much better than this."
-THE INDEPENDENT, IRELAND (June 16, 2008)

"An epic concert for an ecstatic audience."
-MACLEANS, CANADA (June 2008)

"Cohen didn't just present the songs that made him famous - he brought them to life, animating his well-tuned verses with wit and passion and presence."
-TORONTO GLOBE AND MAIL (June 9, 2008)

"When legend Cohen takes to the stage, it's no less than a cultural event of Biblical dimensions."
-THE INDEPENDENT, IRELAND (June 15, 2008)

"Here is a performer who reigns supreme in his ability to illuminate the spiritual, the political and the personal with passion, insight and wit."
-BIRMINGHAM MAIL, ENGLAND (August 4, 2008)

Sound the Trumpet - Royal Music Of Purcell And Handel

Out of the Game
more suggestions…