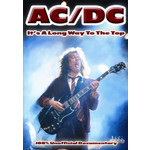 In the early 1970s a groundbreaking group of Australian musicians took the music scene by storm, winning over millions of rockers worldwide.

Fuelled by an increasing supply of drink and drugs their bad boy antics made headlines everywhere - creating their reputation as one of the most hard-working, hard-playing bands around, in turn creating one of most enduring rock acts of all time.

AC/DC's timing was just right. Amidst a music scene which had been dominated by manufactured pop acts the unique energy of AC/DC with its no frills attitude to rock and roll transformed them from humble origins in Australia to an arena-filling phenomenon with worldwide popularity. This is their story.

The complete and unauthorised biography of AC/DC. Over 40 Minutes of in-depth interviews. Exclusive and previously unseen film footage. Insider revelations on band members.