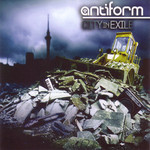 The name Antiform has been on the lips and turntables of Breakbeat and Drum and Bass pioneers for a lengthy amount of time already, but their latest achievements have made everyone wake up and take note. Working with acclaimed vocalist, producer, musician and New Zealand's man of the moment Tiki Taane , the group now release their album, 'City in Exile'.

Antiform hail from the comparatively far flung Auckland, New Zealand - an unlikely breeding ground for the epic, bass-driven, melodic riffs that have created mania on the dance floor and sent crowds of partygoers wild.

The force in question have traveled a vast distance since their conception in the 2002 where brothers Josh and Luke Purcell met Brendon Spain on the national DJ circuit and their combined talents have taken them from a local festival CD to the Hardcore Beats 3 compilation and being nominated for Best Breakthrough DJ at the Breakspoll 2008 awards in the UK, making them the first Kiwis ever to be nominated for this huge accolade. If this wasn't enough, Antiform have captured the attention of hugely influential producers such as The Freestylers, Freq Nasty, Screwface, Ctrl Z, The Autobots, Affinity, and 'Got to be you' has been play listed on the BBC's Radio One with Annie Nightingale.

Far from being pigeonholed into a traditional definition of dance music, you're likely to hear synths, samplers, live guitar and epic scratching at Antiform's live shows. Always guaranteed crowd pleasers, Antiform are continuously a top pick for festival promoters and do not disappoint. Their early projects with Auckland's MC Twincam spawned 'It's All About' which hit number three on bFM's chart. In 2007 Antiform delivered 'Boombox', the track created major hype with Screwface remixing the tune for Hardcore Beats 3 and was signed by the UK's biggest Breakbeat label, Hardcore Beats.

"Antiform are the bollocks!!!! Their tunes most definitely rock the crowd when we drop them beats."
- Aston (The Freestylers)

"These guys are like an adrenaline shot into the heart of NuSkool Breaks, bringing tearing vibes and supreme musicality that few can equal!"
- Screwface

Find Me Before I Die A Lonely Death