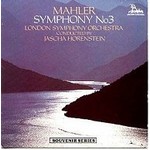 1001 Classical recordings you must hear before you die (1901-1950) - "The playing of the London Symphony Orchestra is remarkable for character, unfailing alertness and ability to reflect every aspect of Horenstein's view of the work." (MusicWeb)

"The playing of the London Symphony Orchestra is remarkable for character, unfailing alertness and ability to reflect every aspect of Horenstein's view of the work. The result of a number of "live" performances. The introductory section of the first movement is gutsy and elemental, not at all a comfortable start. Just the kind of impression Mahler must have had in mind when he pointed Walter's attention to the mountainous landscapes. Notice how the first trombone solo, heavy with funeral dread, conveys a sense of expectancy. Notice too how Horenstein can vary his approach straight after to take in delicacy. It's Horenstein's total grasp of every aspect of the first movement and his matchless sense of structure that welds the movement into an expressive whole and rivets the attention throughout. It also allows him to mark a real spiritual aspect in the episode of the march in the way it approaches from a distance before bursting on us and coming to a climax that is, like the opening, raw and rugged. I've always believed Horenstein was aware there is a lot more than mere programme music here. Notice how order and chaos seem genuinely pitched against each other in the central section where the marches meet. In this we can witness an aspect Arnold Schoenberg drew attention to. That this movement (and the symphony as a whole) is a struggle between good and evil. Horenstein certainly conveys struggle here to a greater extent than many conductors do. The close of the movement sees the performance emerge on the side of the angels but not before Horenstein delivers the most breathtaking account of the closing pages themselves. At Fig. 74, where harp glissandi introduce an explosion of brass, Horenstein grades the brass dynamics from fortissimo, through piano and then up to triple forte, with the latter absolutely shattering. No other conductor on record quite matches this moment. The crashing and pounding percussion that follows are really abandoned also. Magnificent." (MusicWeb)

"Horenstein is the most intensely committed……..the result has the sort of frisson-creating quality one knew from Horenstein's live performances and the recoding quality is both full and brilliant." (Penguin Guide)

"this is the work of a master conductor, and the LSO responds superbly." (Sunday Times)