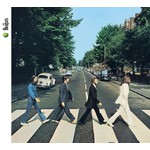 Meticulously re-mastered 'Abbey Road' now features new packaging, and a booklet including detailed notes. For a limited period, the CD will also be embedded with a brief documentary film about the album.

"'Abbey Road' was the last album that the Beatles recorded together before splitting up in 1970 and going on to their own respective solo careers. They certainly went out on a brilliant note, as 'Abbey Road' is easily one of the finest albums ever recorded and contains many classic Beatles songs. John Lennon's hard-rocking, "Come Together" and "I Want You (She's So Heavy)" make a very strong impression while the timelessly beautiful "Something" and "Here Comes The Sun" were penned by George Harrison. A series of song fragments edited together in suite form dominates side two; its portentous, touching, official close ("Golden Slumbers" / "Carry That Weight" / "The End") is nicely undercut, in typical Beatles fashion, by Paul McCartney's cheeky "Her Majesty", which follows. 'Abbey Road' is truly a classic album in every sense of the word!"
- GEOFF

The classic original Beatles studio albums have been re-mastered by a dedicated team of engineers at Abbey Road Studios in London over a four year period utilising state of the art recording technology alongside vintage studio equipment, carefully maintaining the authenticity and integrity of the original analogue recordings. The result of this painstaking process is the highest fidelity the Beatles catalogue has seen since its original release.

Within each CD's new packaging, booklets include detailed historical notes along with informative recording notes. For a limited period, each CD will also be embedded with a brief documentary film about the album. The newly produced mini-documentaries on the making of each album, directed by Bob Smeaton, are included as QuickTime files on each album. The documentaries contain archival footage, rare photographs and never-before-heard studio chat from The Beatles, offering a unique and very personal insight into the studio atmosphere.

Power to the People - The Hits