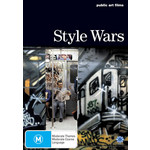 Directed by Tony Silver and produced by Tony Silver and Henry Chalfant, it was awarded the Grand Prize for Documentaries at the 1983 Sundance Film Festival. STYLE WARS is regarded as the indispensable document of New York Street culture of the early '80s, the filmic record of a golden age of youthful creativity that exploded into the world from a city in crisis.

New York's legendary kings of graffiti and b-boys own a special place in the hip hop pantheon. STYLE WARS has become an emblem of the original, embracing spirit of hip hop as it reached out across the world from underground tunnels, uptown streets, clubs and playgrounds.