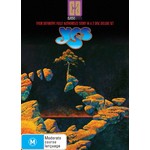 The story of Yes is as controversial as their music... The twists & turns of the band's career is now told for the first time in a series of exclusive interviews with Yes members past + present, for this definitive and fully authorized DVD documentary.

Praised & criticized for defining progressive rock, Yes have been surprising + delighting worldwide audiences for over five decades. On record and on stage, Yes created a fresh sound & striking visuals, blending genres and using state of the art technology to push boundaries, winning legions of new fans with each album. Tracing the musical journey from their debut album, 'Yes' (1969), until 'Magnification' (2001) and beyond, the story of Yes is told by the members themselves in exclusive new interviews. The battle for recognition; the turmoil & upheaval; the stunts + pranks, are revealed here and illustrated by archive performances, photographs & original music, including: "Roundabout"; "I've Seen All Good People"; "Siberian Khatru"; and "Owner of a Lonely Heart". Produced with full cooperation from the band, this documentary captures the musical vision & craftsmanship that continue to make Yes one of the great pioneers of sound.