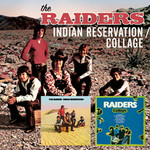 Raven presents for the first time on CD two original, classic albums by the RAIDERS - Collage (1970) and Indian Reservation (1971). With superb quality audio, detailed liner notes, colour booklet, 23 tracks and 77 minutes of music. Throughout the 1960s Paul Revere & the Raiders were one of the most popular and successful American groups, with 14 Top 40 US hit singles and hundreds of television appearances on Where the Action Is and Happening. Their hits between 1965 and 1967 (such as 'Just like Me', 'Kicks') were bold, unpretentious slices of '60s rock & roll with a defiant, punk edge. By 1970 they'd progressed musically, adopting a more mature, contemporary approach exemplified by the brilliant Collage album and the hard riffing single 'Just Seventeen'.

Singer Mark Lindsay had taken over production and song writing duties and was coming up with impressive material. The band also covered vital songs like Laura Nyro's 'Save the Country'. Lenny Kaye famously gave Collage a positive review in Rolling Stone: "This is a great album, on the strengths of Collage we're in for some fine music indeed". Then in 1971 the group scored their biggest hit, the #1 'Indian Reservation' which captured perfectly the spirit of the times and was Columbia Records highest selling single. The album Indian Reservation included another big hit 'Birds of a Feather'. This top value 2-for-1 CD concludes with two bonus tracks, the band's final hits, 'Country Wine' and the crunching 'Powder Blue Mercedes Queen'.