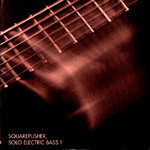 Tom (Squarepusher) Jenkinson's excursions as a "solo" bass virtuoso are now forever immortalised with the release of his amazing, 'Solo Electric Bass 1'.

This in concert recording was taken from one of his spellbinding solo bass performances at Cite de la Musique, Paris, in September 2007. A show that consisted of only Squarepusher on stage with his bass and a small amp... The recording of this minimalist setting has been represented here in its truest form, i.e. in one take with no editing afterward. All compositions on this record are Tim's own too, bar one.

Squarepusher has been lauded time & time again for his awe-inspiring talent on the bass. Flea from the Red Hot Chili Peppers (and a pretty amaaaaaaaaaaazing musician in his own right) who having witnessed Tom's performance at the Jimi Hendrix tribute concert at the Royal Festival Hall in 2008, said: "I am listening to Squarepusher... He is the best electric bass player on the Earth... He is pushing the instrument the farthest... He is the best". Certainly, anyone who has witnessed Tom play will already know of his mesmerising & unique style, which he incorporates very effectually into his amazing concerts.

This strictly limited release is a rare documentation and a "must have" for any Squarepusher fan, or indeed, anyone who wishes to explore some highly interesting + technically astounding compositions for the electric bass guitar.