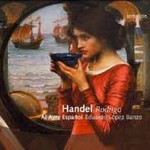 "…this is a major work of outstanding accomplishment and maturity. The performance… has genuine momentum and demonstrates the quality of the piece itself." BBC Music Magazine, September 2009 ****

"…this is a major work of outstanding accomplishment and maturity. The performance… has genuine momentum and demonstrates the quality of the piece itself. Particularly impressive are Kobie van Rensburg's Giuliano, María Bayo's characterful (if occasionally poorly tuned) Esilena, and Anne-Catherine Gillet's Evanco." BBC Music Magazine, September 2009 ****

Ambroisie presents a new edition of one of Handel's Italian period masterpieces, Rodrigo, with an exceptional cast led by Maria Riccarda Wesserling in the title role, María Bayo as his wife Esilena, Sharon Rostorf-Zamir as his young lover Florinda and Max Emanuel Cencic as Fernando. Following Amadigi di Gaula earlier this year, Rodrigo is the second Handel opera on the label conducted by Eduardo López Banzo. The release follows a European tour with the same cast and orchestra, Al Ayre Español, resulting in an interpretation that will undoubtedly lead to a new understanding of the piece almost exactly 300 years after it was written.

"There can hardly be another Handel opera so fraught with unanswered questions, conjectures and legends as Rodrigo," writes Rainer Heyink in his fascinating article in the booklet on the work's background and reconstruction. 'Vincer se stesso è la maggior vittoria, o Rodrigo' (To conquer oneself is the greatest victory, or Rodrigo), to give its full title, is one of Handel's earliest operas, the first he wrote when he arrived in Italy in his early twenties. Until recently, despite the magnificence of the music, it has been little heard, partly because much of the autograph score remained in fragmentary form and the extensive revisions Handel evidently made prior to its premiere in Florence in 1707 were lost. Over the past 25 years, much has been rediscovered or re-created by various musicologists. For this recording, still missing sections were replaced as far as possible by musical material from other works by Handel, an edition reconstructed and published under the auspices of the Hallische Händel-Ausgabe. The typical opera seria plot revolves loosely around the political and marital conflicts and complications in the life of a real 8th-century Spanish king, most caused, of course, by his infidelity. His wife's constancy, forgiveness and wisdom prove the salvation of everyone.