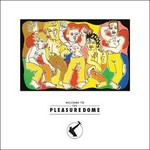 Frankie Goes To Hollywood
Welcome To The Pleasuredome

"'Welcome to the Pleasuredome' was Frankie Goes To Hollywood's flamboyant debut release and is undoubtedly a landmark album. This re-issue edition comes complete with a 12-page picture booklet, containing photos, illustrations and sleeve notes by Chris Welch

This classic recording of catchy and rather fetching music was produced by one-time Yes member, Trevor Horn, who has been responsible for production on some of the most stunning 'pop' albums in the eighties and nineties. His work on this CD (a double LP when it was released) is particularly outstanding and it still sounds fantastic today.

Highlights are many, especially the huge FM radio / MTV hits, 'Welcome to the Pleasure Dome' (which featured a special guest appearance from guitar maestro Steve Howe), the stirring, political 'Two Tribes' plus of course their all-time classic ballad, 'The Power of Love'. And who can forget when the notorious 'Relax' splashed across the airwaves? With all it's colour, flair and campification, everybody had to stop and listen!

In their time, Frankie Goes to Hollywood were well received all over the world, but certainly snagged their fair share of mild controversy... i.e. some people took offense to the rather risqué images that appeared in their videos and on this albums original sleeve artwork, etc. However, said hullabaloo did little more than endear this group of young men to their fans even more.

Although first released in 1984 (to great acclaim), this shining gem still sells regularly today, and will stand the test of time as a defining moment in modern 'pop' music!"
- GEOFF & MARTY

Sweet Dreams (Are Made of This) : Special Expanded Edition