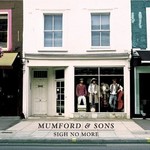 "A band who know they're onto something not just good, but spectacular."-"An album that delivers everything...Classy stuff."-"Mumford & Sons have that knack for playing the most vital of instruments, the heartstrings."

"A band who know they're onto something not just good, but spectacular."
- NME

"An album that delivers everything...Classy stuff."
- The Fly

"Mumford & Sons have that knack for playing the most vital of instruments, the heartstrings."
- The Independent

"Barnstorming...their four voices sound as one unstoppable force, brushing aside anything in its path."
- Evening Standard

Mumford & Sons create a gutsy, old-time sound that marries the magic of Crosby, Stills, Nash and Young with the might of Kings Of Leon, and their incredible energy draws us in quickly to their circle of songs, to the warmth of their stories, and to their magical community of misty-eyed men. With each release, the music of Mumford & Sons got brighter, bolder and brawnier, with an increasing focus on their empassioned and intimate lyrics. "What we write about is real, and we sing and play our instruments more passionately cos we feel like we need to. We love honest music," says Winston.

Then came the time to record their debut album - and then came the extraordinary producer who wanted to work with them. Markus Dravs recorded Arcade Fire's Neon Bible, Björk's Homogenic and The Maccabees' Wall of Arms, and he saw similar crossover potential in the Sons. He took them to the legendary Eastcote Studios where Arctic Monkeys, Brian Eno, Tindersticks and Laura Marling have honed their music on its vintage equipment; made the band buy good instruments; set them a daily routine; and encouraged them to try and work even more instinctively, to strengthen their already-powerful musical personality. "He wanted us just to sound like us", explains Ben. "He talked about us working on our music's most jubilant and melancholic moments, and make them even more evocative. And over those four weeks, everything came together."

The Lost Notebooks of Hank Williams