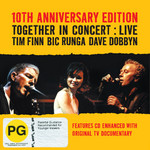 This classic live album from three of NZ's most talented and treasured singer/songwriters is re-issued with a fantastic TV documentary about the tour included.

To coincide with their extensive winery tour in 2010, plus the 10 year anniversary of it's original release, this classic live album from Tim Finn, Bic Runga, and Dave Dobbyn is re-issued with a fantastic TV documentary (never previously available) as enhanced CD content.

In August 2000, three of our most talented and treasured singer / songwriters, Tim Finn, Dave Dobbyn, and Bic Runga, embarked on a 26-date theater tour of New Zealand, sharing the stage while performing some of the best-known songs from each others catalog. 'Together in Concert' features the three artists performing Tim Finn's "Six Months in a Leaky Boat", Weather With You" and "Persuasion", Bic Runga's "Sway", "Something Good" and "Drive", and Dave Dobbyn's "Whaling", "Loyal" and "Just Add Water", among others.

The best tracks from across the tour were personally selected by the trio for the 'Together in Concert' album. It was a huge success and film of the tour resulted in a half hour TV special that screened on TVNZ that same year. The documentary footage is now finally available in this special set.