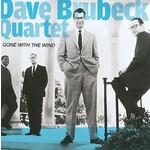 Dave Brubeck
Gone With The Wind

This two-fer edition places the Dave Brubeck Quartet's classic 1959 Gone with the Wind album -- the date that immediately preceded Time Out -- with Jazz Impressions of Eurasia, a disc that documented an 80-city world tour released a year earlier. While listed in chronological order on the cover, these albums are actually presented in reverse sequence by AIS/Poll Winners in Europe. It should also be noted that this edition does not contain any of the bonus tracks that appeared on the remastered versions Sony Legacy reissued in the United States, though the sound quality is in 24-bit. In any case, these two recordings offer a very solid portrait of Brubeck's band, with bassist Gene Wright, drummer Joe Morello, and alto saxophonist Paul Desmond firing on all creative and technical cylinders.