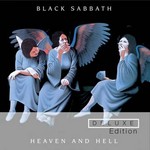 One of the most important and influential of Black Sabbath's releases, this Deluxe Edition of 'Heaven and Hell' comes with a bonus disc of live material!

"Originally released in April 1980, 'Heaven and Hell' was the first album to be released by the new Black Sabbath lineup of Ronnie James Dio, Tony Iommi, Geezer Butler and Bill Ward. It remains one of the most important and influential of Black Sabbath's releases and the Deluxe Edition comes with a bonus disc of live material!

The previous two records from The Sabs had been inconsistent and poorly received in comparison to their early 70s classics. After giving Ozzy Osbourne the boot in late 1979, the remainder of Black Sabbath recruited the ex-Elf / Ritchie Blackmore's Rainbow singer - which proved to be a major shot in the arm for the group.

Multi-octave voiced Dio put his heart and soul into the project - from the moment that he'd written the first song with Iommi (the heavy epic "Children of the Sea"), the guys knew they were onto a winner. More excellent compositions followed, such as the super-energised opener, "Neon Knights", and the fist-pumping, metal anthem "Die Young". Before long, this new Black Sabbath line-up had completed one of the greatest hard rock albums of all time, which would remain as one of their best sellers.

The centrepiece of 'Heaven and Hell' is the glorious title track, which builds from the throb of Geezer's insistent bass into a storming, Iommi riff fest. During all of this, Ronnie James Dio sings of the ying / yangs, good / evil in the world - the "kings and queens who blind your eyes and steal your dreams…" - spine-tingling stuff! Another highlight is the highly melodic six-minute closing cut, "Lonely is the Word" which features high class, searing guitar work from Tony Iommi.

Despite major success, the Dio-fronted band only completed one more studio album and tour together, before they went their separate ways. A short-lived re-union in the early 90s seemed the last we would hear of them together, but thankfully in 2007, Dio, Iommi and Butler re-grouped (with Vinnie Appice on drums), taking the Heaven and Hell name as their moniker.

"They say that life's a carousel, spinning fast, you've got to ride it well. The world is full of Kings and Queens who blind your eyes and steal your dreams, It's Heaven and Hell!!"

The Ronnie James Dio Story - Mightier Than the Sword

The Number of the Beast