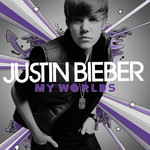 Justin Bieber's 'My Worlds' features all 19 tracks on one CD - including 8 songs which were previously only available on the iTunes version, plus an exclusive bonus track and poster!

Justin Bieber's 'My Worlds' features all 19 tracks on one CD - including 8 songs which were previously only available on the iTunes version, plus a bonus track!

The exclusive NZ edition of 'My Worlds' also includes a pull out poster mosaic of Justin coloured by the faces of NZ fans! This came about through a promotion through C4 website, where fans were given the opportunity to literally be a part of Justin's new album, by submitting a photo to be included in the mosaic.

An old soul is the last thing you would expect to find inside Justin Bieber. But all it takes is one listen to the 15-year-old soul-singing phenomenon to realize that he is light-years ahead of his manufactured pop peers.

After posting dozens of homemade videos on YouTube in 2007, where the multi-talented Bieber put his impeccable spin on songs from artists like Usher, Ne-Yo, and Stevie Wonder, Justin racked up over 10,000,000 views purely from word of mouth.

Seven months after Justin started posting his videos online, former So So Def marketing executive Scooter Braun flew the then 13-year-old singer to Atlanta to meet with his elite colleagues. As if Justin's natural singing talent wasn't enough to impress Scooter's inner circle, Braun knew Bieber was also a self-taught musician who plays the drums, guitar, piano, and trumpet.

In October 2008, Justin officially signed to Island Records. His debut album, 'My World', is an intimate look into the mind of a budding young renaissance man. With production from hit men like the Dream and Tricky Stewart, who produced "Umbrella" for Rihanna and Beyoncé's smash "Single Ladies (Put a Ring on It)," Justin has everything he needs to achieve pop supremacy.

His first single, "One Time," produced by Tricky, is about one of Justin's favorite topics, puppy love. Usher joins Justin on "First Dance," where the two share verses on a song that Bieber describes as "a slow groovy song that people can dance to." On the Midi-Mafia-produced "Down to Earth," Justin digs deep to talk about growing up. "Bigger" finds the teenage singer maturing at a steady rate while motivating his listeners to strive for their goals.