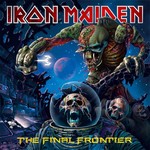 One of the strongest and most wildly inventive productions from Maiden, 'The Final Frontier' is a 76-minute tour-de-force of soaring melodies, thunderous heaviness and astonishing compositional bravery.

'The Final Frontier' is Iron Maiden's 15th album, from a history that now spans 30 odd years, and plainly one of the strongest and most wildly inventive things they have ever produced...

Reunited with long-time Maiden producer Kevin "Caveman" Shirley in early 2010 at Compass Point Studios, Nassau, the band laid down much of 'The Final Frontier' and then moved to L.A. to finish the recording and do the mixing. Compass Point Studio is very familiar to the band, as it was where they recorded the 'Piece of Mind' (1983), 'Powerslave' (1984), and 'Somewhere in Time' (1986) albums.

Bruce Dickinson commented: "The studio had the same vibe and it was exactly as it had been in 1983, nothing had changed! Even down to the broken shutter in the corner, same carpet, everything. It was really quite spooky. But we felt very relaxed in such a familiar & well-trodden environment and I think this shows in the playing + atmosphere of the album".

A 76-minute tour-de-force of soaring melodies, thundering heaviness, and astonishing compositional bravery, 'The Final Frontier' looks certain to be regarded as a new landmark in the band's career.

Music for the Man Cave