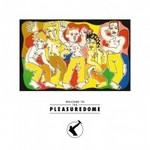 Frankie Goes To Hollywood
Welcome To The Pleasure Dome (2LP)

Frankie Say Relax…
Those three words in black letters on white oversized T-shirts persist as a main part of the imagery of the eighties. But even if you take away all the Malcolm McLaren-styled-marketing, 'Welcome to the Pleasuredome' still stands out as one of the seminal records of the decade.

Produced by Trevor Horn (Art of Noise, The Buggles and briefly YES), it should. The sometimes over-the-top songs are interspersed with snippets of a Ronald Reagan impersonator and bombastic orchestral compositions. Put their most famous song "Relax" in the middle of this and the song that created so much controversy when it was first released becomes a model of restraint. The irresistibly pounding yet simple bass line makes it as much a floor-filler today as it was in 1984.

The Orwellian "Two Tribes", released at the height of the Cold War, still seems strangely poignant. "The Power Of Love", the hyper-ballad that topped the British charts for a number of weeks, is still deliciously cheeky.

The re-mastering of this album will make your head spin and is the first that does the Trevor Horn production justice. As this is the first re-issue of the album on vinyl in 25 years, it's a damn good thing Music On Vinyl is releasing it on 180 grams audiophile vinyl!