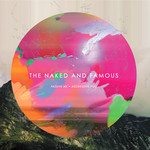 The Naked and Famous
Passive Me, Aggressive You

"Finally. A young New Zealand band so brilliant, so thrilling, so daring and delicious that I want to write their name in big red letters on my pencil case..."

The outfit who have got Sunday Star Times writer Grant Smithies heading back to the classroom and breaking out 5 out of 5 stars are Auckland's rapidly ascending, The Naked and Famous.

"The Naked and Famous (name taken from a line in a Tricky song, not Paris Hilton) have been putting in the hard yards for a number of years now. This full-length debut follows the release of two "ahead of their time" EPs in 2008 that punched well above their weight and kept fans hanging out for more of the band's unique synth pop-rock.

'Passive Me, Aggressive You' does not disappoint. From opening track and lead single "All of This" the energy is consistent, engaging, and oozes youthful optimism. "Young Blood" has just earned the band a Silver Scroll nomination and on top of this they are up for a Critic's Choice award at the N.Z. Music Awards in October.

Solid, simple drumbeats and bass lines set the cornerstone for dirty '80s synth and distorted guitar hooks. The vocal duties are shared by Ailsa Xayalith and Thom Powers, complimenting each other well, one never overpowering the other whilst adding diversity and range to a record that is sure to be a perfect spin for the coming summer months.

Take it home, turn it up already!"
-HEIDI