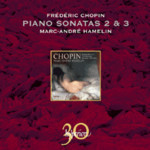 "Simply, subtly sublime: Marc-André Hamelin's Chopin is up there with the very best. After recent notable recordings of particularly exuberant fare, from Alkan to Antheil, Marc-André Hamelin returns to more mainstream territory with this Chopin traversal. Yet, from a musician known for virtuosity, there is nothing remotely flashy here, hardly an accent that does not seem part of a natural emotional progression. Indeed, these are deeply considered and most affecting readings. One would expect nothing less."
Gramophone Magazine Editor's Choice - February 2009

Recent discs from Marc-André Hamelin have concentrated on music which is obscure, under-recorded or virtually unplayable. However in this latest recording he turns his attention to two mainstays of the Romantic repertoire: Chopin's Piano Sonatas Nos 2 and 3. The results are simply staggering: playing of matchless brilliance and consummate artistry, stunningly recorded. As a recent critic of Hamelin's live performance of the B minor sonata remarked, 'Hamelin starts where most other pianists leave off … such was his control that frequently it seemed as though an extra dimension were being added, the music's teeming internal life clarified by his ability to voice the inner parts'.

The disc is completed by some of Chopin's greatest single-movement works; the contrasting two Nocturnes of Op 27, the extraordinarily colouristic Berceuse Op 57 and the monumental Barcarolle in F sharp major. We think this is one of the most authoritative and important Chopin discs to have appeared in recent years-an unmissable release.