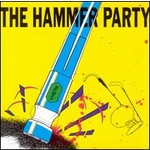 Initially a pairing of Big Black's first two EPs, Lungs and Bulldozer, The Hammer Party first found release through Homestead on vinyl and CD. When Touch & Go bought out the band's material, they reissued it, adding the band's third EP, Racer-X. Those seeking a quick introduction to the early-'80s post-punk combo who welded industrial's nihilism to the angularities of Gang of Four, Killing Joke, and the Pop Group and the sheer claustrophobic terror and mayhem of Suicide should look no further. Though containing later material, The Rich Man's Eight Track Tape is actually the best place to go for a first dose of Big Black. The earlier stuff found here isn't up to snuff when compared to Atomizer and Songs About F***ing, but it's still remarkably riveting. ~ Andy Kellman, All Music Guide