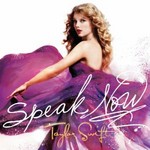 "These songs are made up of words I didn't say when the moment was right in front of me. These songs are open letters. Each is written with a specific person in mind, telling them what I meant to tell them in person."

Four-time Grammy award winner Taylor Swift is the top-selling digital artist in music history and had the #1 best-selling album in any genre of music in both 2009 and 2008 in the US. This year, at the age of 20, she became the youngest artist in history, and the first female solo country artist ever, to win the music industry's highest honor, the Grammy Award for Album of the Year.