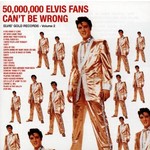 The release of this album, seen in its proper historical context, is an indicator of just how bright Elvis Presley's star shone in the late '50s. His first hits collection was issued in March 1958, on the eve of his going into the Army; his second was the first "volume two" greatest-hits album ever issued on a rock & roll star, appearing weeks ahead of his leaving the Army in March 1960. Anyone who buys the notion that Elvis was "tamed" during his first years at RCA will find revelation in "A Big Hunk of Love," "I Need Your Love Tonight," and "I Got Stung," some of the greatest pieces of hard rock & roll that the King ever cut -- and all were recorded in the midst of Elvis' stay in the Army, in a hastily arranged session in Nashville during June 1958. By this time, his voice was becoming one of the finest instruments in rock & roll, his idolization of Dean Martin and other popular singers paying off with a degree of control and articulation that his rivals could only envy, and it's all laid out here on what are still some pretty hard-rocking sides. [The remastered edition not only improves the sound significantly, but adds eight songs to the original ten. The notes are thorough, although they reveal the stretching that the producers were engaged in by citing British releases as the justification for inclusion. But the quality of the music is undeniable.
4.5 / 5 All Music Guide.

Side A:
A Big Hunk O' Love
My Wish Came True
(Now And Then There's) A Fool Such As I
I Need Your Love Tonight
Don't
I Beg Of You
Santa Bring My Baby Back (To Me)
Santa Claus Is Back In Town
Party
Paralyzed

Side B:
One Night
I Got Stung
King Creole
Wear My Ring Around Your Neck
Doncha' Think It's Time
Mean Woman Blues
Playing For Keeps
Hard Headed Woman
Got A Lot O' Livin' To Do!
(There'll Be) Peace In The Valley (For Me)