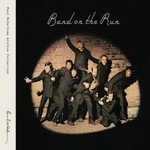 'Band on the Run' is generally considered Paul McCartney's strongest post-Beatles effort. The album was also his most commercially successful - selling well and spawning two hit singles, the multi-part pop suite of the title track, and the roaring rocker "Jet". On these cuts, and elsewhere, McCartney's penchant for sophisticated, nuanced arrangements and irrepressibly catchy melodic hooks is up to the calibre he displayed in the Beatles, far surpassing the first two Wings releases 'Wildlife' and 'Red Rose Speedway'. The album has the majestic, orchestral sweep of McCartney's 'Abbey Road'-era ambition,with a wide range of style-dabbling, from the swaying, acoustic jazz-pop of "Bluebird" to the appealing, straightforward rock of "Helen Wheels" to the wiry blues of "Let Me Roll It" to the swaying, one-off pub singalong "Picasso's Last Words (Drink to Me)").

This version of 'Band on the Run' features the original album newly re-mastered at Abbey Road studios, along with a 16-page booklet presented in digipak cover.

"...the finest record yet released by any of the four musicians who were once called the Beatles."
- Jon Landau, Rolling Stone Magazine (1974)

"Concern and care are the hallmarks of this outstanding package."
- Billboard (1973)

"On his best post-Beatles album, McCartney uses his mastery of studio technique and gift for musical juxtaposition - from symphonic touches to hard rock to melodic acoustic music - in a wonderful collection of well-constructed songs, including the Top Ten hits "Helen Wheels," "Band on the Run," and "Jet."
- William Ruhlmann, The All-Music Guide to Rock (1995)

"Paul McCartney and Wings trekked to EMI's studio in Lagos, Nigeria, for seven stressful weeks to make Band on the Run, regarded by many as McCartney's finest post-Beatles hour. Opening strongly with the one-two punch of "Band on the Run" and "Jet" (named after Paul's dog), it proved that McCartney still knew how to rock.
- Rolling Stone (2003)