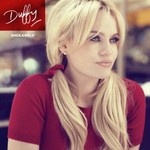 Duffy is back with one of the most eagerly anticipated releases of 2010. The acclaimed British singer presents 'Endlessly', the follow-up to the enormously successful multi-platinum selling album 'Rockferry'.

Written and recorded in New York and London, over the past year, 'Endlessly' has formed a unique partnership between veteran writer Albert Hammond and the singer herself. (The legendary Mr. Hammond is best known for writing the classic songs "When I Need You", "The Air That I Breathe" and "To All The Girls I Loved Before"). Together they have written and produced the next chapter of Duffy's meteoric career.

The infectious lead single "Well, Well, Well" is the first taste from this heady confection, and features an incomparable rhythm section played by Hip-hop band, The Roots. Other highlights include "My Boy", "Endlessly", "Don't Forsake Me", "Lovestruck" and "Breath Away".

Duffy took the world by storm with her debut album 'Rockferry' selling over 6.5 million copies worldwide and winning numerous accolades including three BRITs and one Grammy. 'Rockferry' was the biggest selling album of 2008 in the UK and is one of Universal Music's most successful debut artists ever. Duffy also performed in Australia on the V Festival where she was a crowd favourite and received spectacular reviews.