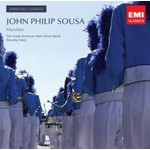 Born in Washington DC in 1854, John Philip Sousa was enlisted by his father, a trombonist in the marine band, as an apprentice in the US Marine Corps. After years as a military bandmaster he later formed his own band. Although Sousa wrote many songs and other pieces, it is as a composer of Marches that he is known to us today and, indeed, he wrote a great many of them.

Some Sousa marches are among the best known in the repertoire - who doesn't know The Stars and Stripes Forever and The Liberty Bell (the signature tune for Monty Python's Flying Circus). Here we have a generous selection of Sousa Marches played by a Great American band.