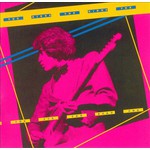 Kinks, The
One For The Road

The Kinks' scattershot U.S. career never fully flourished like that of their British Invasion peers. The most quintessentially British of British bands -- especially in the increasingly nostalgic songs of vocalist/rhythm guitarist Ray Davies -- The Kinks enjoyed a spike in popularity in America in the late '70s and early '80s. The gold-selling 1980 double-live album One for the Road is a fascinating document of trailblazing elder statesmen who paved the way for heavy metal and punk, but never felt a glorious pop song was out of their grasp. It also proves that Dave Davies is a criminally underrated lead guitarist. Brothers Dave and Ray Davies, bass guitarist Jim Rodford, drummer Mick Avory, and guest keyboardists Ian Gibbons and Nick Newell recorded One for the Road at several concerts in 1979 and 1980. "Lola" is the best-known track from this album, and this live reading was a minor hit single; Ray Davies' teasing intro shows his playful side. "The Hard Way," "Low Budget," a raw, stripped-down "(Wish I Could Fly Like) Superman," "Celluloid Heroes," and "You Really Got Me" are the other standouts.