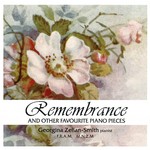 "Favourites from granny's piano stool played with affection by Georgina Zellan-Smith. Mozart goes Turkish and Albert Ketelby saunters through a Persian market although Handel's Largo, it must be admitted, cries out for a little more razzamatazz in its arrangement. Lilburn's most celebrated Prelude and Hine e Hine, of Goodnight Kiwi television fame, let us know where we are in the world."
(William Dart NZ Herald)

Georgina Zellan-Smith is one of New Zealand's most accomplished pianists with a long list of accolades, dating right back to her debut at London's Wigmore Hall , through to her recordings of ravel and laterley her work with the Auckland University.

There has long been a gap in the market for a solo piano album of pieces which are constantly asked for over the counters, and thus this project was born. Many of those short pieces such as 'Robin's Return' and 'Remembrance' are old favourites and Georgina also includes a touch of local flavour with her transcription of 'Hine e Hine'.

All the old favourites are here played in top class form.

100 Best Children's Classics (Includes Peter and the Wolf, Carnival of the Animals and The Sorcerer's Apprentice)