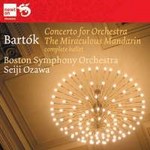 This CD contains two works that illustrate the two very different sides to Bartók's musical personality. The ballet The Miraculous Mandarin (1926) is a work that arrived on the scene with the impact of Stravinsky's The Rite of Spring. It tells the story of a wealthy mandarin who is lured into a brothel, where a girl dances provocatively for him. He throws himself at the girl who runs off, chased by the mandarin. He in turn, is chased by the thugs and pimps who stab, strangle and hang him - stealing his purse and money in the process. His battered body refuses to die, and begins to emit a strange blue-green light. The girl finally allows him to hold her, whereupon his wounds bleed, and he is able to die.

The Concerto for Orchestra dates from 20 years later, when Bartók was living in exile in the USA to escape the Nazis. The work was commissioned by Serge Koussevitzky, conductor of the Boston Symphony Orchestra. At this time Bartók was suffering from the leukaemia that would kill him two years later in 1945. The work is very accessible, and in the five movements each section of the orchestra is given an opportunity to shine. The spirit of folk music is never far away, possibly a nostalgic reference to Bartók's youth, and his homeland.

'Ozawa is best where the going gets frantic (his finale is terrific, especially at the outset, and he plays Bartók's more concise original ending) … That terrible moment when the thugs hang the Mandarin from a lamp hook is impressive and the engineering yields a nasty nastier aural snarl … Viewed overall, Ozawa is strong on sensuality - those all-pervading glissandos, the seduction games and the languidly teasing sequences that lead to the chase.' Gramophone, AUGUST 1995

Symphonies Nos. 8 and 9 / In Nature's Realm / The Noonday Witch