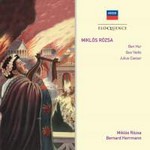 One of the most entertaining composer autobiographies is Miklós Rózsa's Double Life,

first published in 1982 - the same year that he scored his last film (the Steve Martin vehicle Dead Men Don't Wear Plaid). The book's title is an allusion to Rózsa's twofold career as a composer of music for the concert hall and for motion picture soundtracks. Rózsa was respected by Hollywood and by Carnegie Hall alike, and both halves of his 'double life' as a composer were artistically valid and complete unto themselves. Master of the epic, his scores for Ben Hur and Quo Vadis are legendary. The colourful booklet notes by Raymond Tuttle include fascinating commentary on the background to these recordings as well as the sensitive relationship between Rózsa and Bernard Herrmann. Also included is the latter's recording of music from Rózsa's score for Julius Caesar - one of the first films to be recorded in stereo. The recordings of both Ben Hur and Quo Vadis had limited release on Decca/London and are now more readily available in this new coupling.