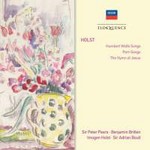 "Britten's accompanying matches the unfailing understanding of the singing, and with its excellent quality this can be warmly recommended"
(Gramophone on Humbert Wolfe Songs)

An inspired arrangement between Decca and Imogen Holst, led to a series of pioneering recordings of her father Gustave Holst's music, which appeared on Argo and are now comprehensively released on CD as part of the Eloquence series. This collection opens with the Pears/Britten recording of a substantial English song cycle never before published on CD, the twelve Humbert Wolfe settings, beautifully sung and mercurially played. Wolfe, largely forgotten today, 'was a civil servant, essentially a Londoner, and a miniaturist with an individual brand of whimsy and, at his best, a real feeling for words' (Gramophone). Imogen Holst's original notes for the LPs - 'acutely perceptive, objective and candid' noted Gramophone's reviewer Lionel Salter - are here reprinted as are the full texts. Much of the music was practically unknown at the time of this recording (beautifully captured by legendary Decca engineer Kenneth Wilkinson in London's Kingsway Hall) and well overdue for publication. The collection is rounded off by Boult's celebrated 1961 recording of The Hymn of Jesus.