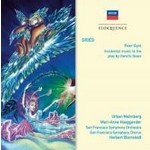 Grieg's mighty score for the incidental music to Ibsen's dramatic literary work here receives a thrilling performance under Herbert Blomstedt with an orchestra from the very city Peer Gynt himself was reputed to have visited on his travels. The 73 minutes of incidental music take in all the movements traditionally included in the two suites but go beyond, to give a glimpse of extraordinary tracts of score not otherwise well known.

Keeping Score - The making of a performance... Tchaikovsky's 4th Symphony.