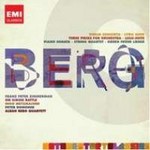 Alban Berg (1885-1935) is, arguably, the most approachable of the three great serialist composers who were working in Vienna at the turn of the century - Schoenberg and Webern being the other two. Of the three, it was Berg whose technique was less stringently atonal: his music has a romantic lyricism that is largely absent from the later music of his two friends.

This is no better illustrated than in his last work, the gorgeously wistful Violin Concerto of 1935, a work that is dedicated 'To the Memory of an Angel' - the angel being the recently deceased 18-year-old, Manon Gropius, daughter of the Bauhaus architect Walter Gropius and Mahler's surviving widow Alma.

The other works in this set help to make it the perfect introduction to Berg's music, from the Suite from his notorious opera Lulu to the beautiful Lyric Suite and the early lyricism of the Seven Early Songs.