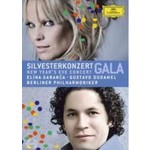 The 2010 New Year's Eve concert, from Berlin, frames two of the most prominent stars on DG's roster, Elina Garanca and Gustavo Dudamel.

Recorded live, this gala performance sparkles with a selection of arias and orchestral works that include excerpts from one of Garanca's most celebrated roles, Bizet's Carmen, and Marguerite in Berlioz's Damnation of Faust.

As well as providing world class accompaniment, the Berlin Philharmonic makes a stirring contribution to the program with the overture to Berlioz's thrilling Roman Carnival and excerpts from Manuel de Falla's ballet, The Three-Cornered Hat.

Filmed in HD, the gala will be released in 16:9 widescreen with audio in PCM and DTS surround sound .