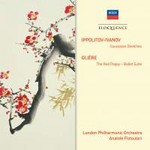 Many famous conductors had unusual lives, but the life of Anatole Fistoulari (1907-1995) was more unusual than most. When he was just seven, he conducted a performance of Tchaikovsky's Sixth Symphony in his native city of Kiev. At thirteen, he conducted Saint-Saëns's Samson and Delilah in Bucharest. While a young man, he travelled throughout Europe and North America, accompanying bass Feodor Chaliapin and conducting the Ballet Russe de Monte Carlo. Escaping the European mainland in World War II, he came to England, where he soon married Gustav Mahler's sole surviving daughter, Anna, and was named principal conductor of the London Philharmonic Orchestra. He became a British citizen in 1948.

He recorded extensively for Decca and the Glière and Ippolitov-Ivanov pieces were taped by the Decca recording team and issued by RCA in 1957 as part of a reciprocal arrangement the two companies had at the time. This is their first appearance on Decca as well as on CD.

The suite from Glière's The Red Poppy is drawn from a three-act ballet, its music full of backward glances towards Rimsky-Korsakov and others, and containing a spirited account of the popular 'Russian Sailor's Dance'. Ippolitov-Ivanov took an active interest in Russia's ethnic minorities and he brings to this music several of the influences that pervaded his time in Georgia. The popularity of the first set of Caucasian Sketches (recorded here) has eclipsed that of the second.

"plenty of colour and glitter in this recommendable performance"
(Gramophone)