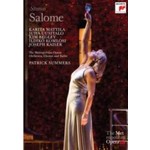 "Jürgen Flimm is the producer of this Salome, with set and costume designs by Santo Loquasto, choreography by Doug Varone. Updated to the 20th century, this concept takes place in a Middle Eastern country in which Herod's palace seems to be a hotel filled with partying guests, conveniently next to a mine shaft in which Jochanaan is imprisoned. Salome doesn't look at all like a virginal young princess. She is a harlot from the beginning, a seasoned, alcoholic vamp who knows her way around and how to use her sexuality to get what she wants. Strauss intended to show her progression from innocence to degradation, but that cannot happen with this concept of the opera. The Dance of the Seven Veils is a tour-de-force for Mattila although hardly a strip tease. At the end, Mattila was totally nude for a few seconds, but you won't see this on the video. The entire opera is strongly cast, and Patrick Summers is perfect on the podium. Two singers make debuts, bass Juha Uusitalo as Jochnaan, and young Canadian tenor Joseph Kaiser (probably the handsomest Narraboth ever). But the superstar is Mattila who dramatically and vocally is quite amazing. Video and audio are excellent. Lovers of Strauss's erotic masterpiece won't want to miss this."
(ClassicalCdReview)

The Metropolitan Opera's Peabody and Emmy Award®-winning series The Met: Live in HD has excited audiences around the globe. Four highly-requested productions from the past two years are now available on DVD for the first time. These four stunning releases contain recordings of recent acclaimed Metropolitan Opera productions, taken from state-of-the-art, high-definition transmissions broadcast live from the stage of the Met, and include backstage interviews with the cast and production crew.

Indisputably one of the greatest Salome's of our time, Karita Mattila reprises her stunning interpretation including her unforgettable "Dance of the Seven Veils".